The Ptolemy Class was once the backbone of commerce in the Federation, ferrying cargo and passengers to many different planets or starbases via a series of different transport containers that could be attached via a large docking clamp at the end of a connecting dorsal.

In 2274, two Ptolemy Class vessels underwent a refit to study the feasibility of modernizing the class. However, with the growth of civilian cargo lanes and the development of the James Harvey Class, further refitting of this class was canceled and the remaining ships in the class were decommissioned. The decommissioned ships were, after being stripped of weaponry and other sensitive technologies, sold into civilian service.

Meanwhile, the two ships that were refitted, the Al Rashid and the Schiaparelli, continue to capably serve Starfleet in a limited capacity. 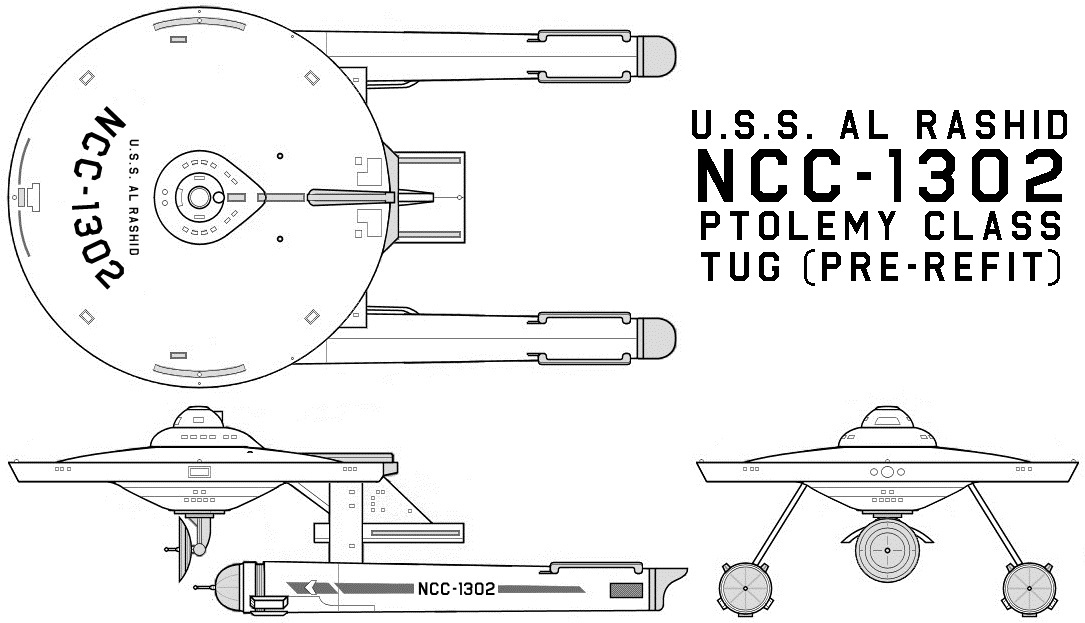 * ship lost in the line of duty
** ship decommissioned

The Ptolemy Class is not an original design to Yotsuya's Shipyard, and is included to provide context as it is mentioned in the description of other classes included here.

The Ptolemy Class was designed by Franz Joseph for his non-canon book, Star Fleet Technical Manuel. However, the class is considered canon due to elements from Joseph's book being used during the production of the first few Star Trek films, when they mined the book for details to include in com chatter and on background displays.

Regarding registry numbers, this class is the one time that this website makes a deliberate break from canon, and also does not make an in good faith attempt, with a Star Fleet Technical Manuel designed ship, to follow that book's numbering where canon did not later contradict it. Canonically, the only known Ptolemy Class vessel is an unnamed NCC-3801. This would match the U.S.S. Ptolemy herself, as seen on the list offered my Memory Beta. There, Ptolemy Class ships began with NCC-3801 and ran all the way to NCC-3940! (And also the strange inclusion of an NCC-293391.)

This website operates under a not too unreasonable supposition that registry numbers somewhat roughly reflect the order in which starships were constructed. While this website does accept some degree of registry number weirdness (see in particular notes on the Constitution Class for examples) having a ship that was presumably a contemporary (or even predecessor) of the Constitution Class, but had a registry so far ahead of the much newer Excelsior Class, could not be reconciled. And so, a decision was made to replace the first half of the registry number, the "38," with a "13." Thus, NCC-3801 became NCC-1301 and so fourth. This continued through NCC-1399, stopping short of listing all of Memory Beta's Ptolemy Class ships only so as not to conflict with this website's Tomobiki Class, which begins with NCC-1400.

NCC-1371 was then skipped as that number, canonically, belongs to a Constitution Class ship (thanks to the aforementioned weirdness).

Once accounting for the change in registry number, all names as listed on Memory Beta were carried over, except for NCC-3815 (or, on this website, NCC-1315) which was named U.S.S. Copernicus. Since that name canonically belongs to an Oberth Class ship, NCC-1315 was renamed U.S.S. Tyson. (This was done in honor of Neil deGrasse Tyson who, aside from the whole Pluto killing thing, seems a decent chap who has done much for the cause of furthering scientific understanding amongst the masses.)

The schematics displayed above were taken from Vance's Schematics as found on The Star Trek LCARS Blueprint Database. The registry number appearing on the schematics has been changed to reflect the one used by this website, as explained above.