The Constitution Class starships, designed as the primary replacement for the Tomobiki Class, quickly became the premier front-line Starfleet vessels in the latter half of the 23rd century. They were designed for long duration missions with minimal outside support and are best known for their celebrated missions of galactic exploration and diplomacy which typically lasted up to five years.

While the Constitution Class had had minor refits in the past, an extensive refit was undertaken in the early 2270's. Beginning with the U.S.S. Enterprise, the refit of which was finished slightly prematurely in 2273, the new design proved to be a massive success. The rest of the class was also updated, and similar refits were begun on other preexisting starship classes still in service. This began a massive modernization of the state of Starfleet. 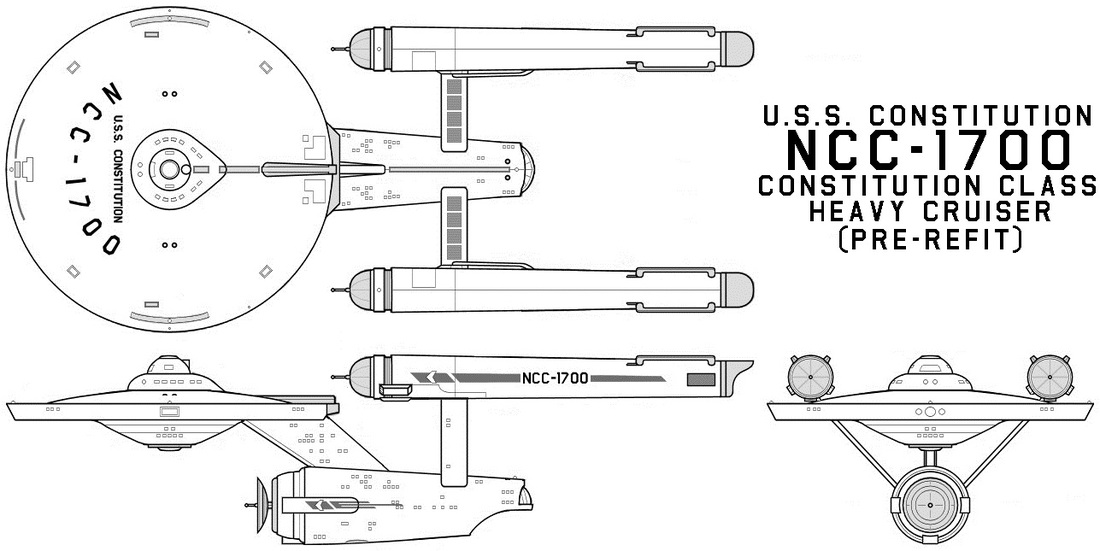 This class, obviously, is not original to Yotsuya's Shipyard, but is the class that the U.S.S. Enterprise, the main ship in the original Star Trek series, belonged to. It was originally designed by Matt Jefferies for the television series, and the refit version as featured here was designed by Andrew Probert (following on fron Jefferies' original design) for Star Trek: The Motion Picture.

The schematics presented above were taken directly from Vance's Schematics as featured on The Star Trek LCARS Blueprint Database. They are being included on this website to provide context as the Constitution Class is mentioned in the write-ups of many of the other starship designs introduced here.

The list of ships presented above was assembled using information found on Memory Alpha. Every attempt was made to stay as close as possible to canon, although to assemble a complete list some conjecture was necessary on the part of Yotsuya's Shipyard.

We will not even attempt to justify the strange lack of any reason to the registry numbers assigned to ships within the Constitution Class. Alas, it is far easier to assemble a consistent list when it is being made by one fan rather then produced over decades by various members of the production team, following no rhyme or reason.

The reasoning behind some of the new conjecture done here:

The two Intrepids: The list on Memory Alpha provides NCC-1631 as the Intrepid lost in The Immunity Syndrome. There was an unnamed ship in Star Trek IV with a registry of NCC-1707. Two contradictory conjectures applied the names Intrepid and Hood to this number. Since the Hood has officially been assigned to NCC-1703, this leaves only Intrepid available to go with the number 1707. One must further conjecture that this is a new ship built to replace NCC-1631, as two ships of the same name would not be in service simultaniously.

NCC-1685: The only conjectural name suggested for this ship is the U.S.S. Eagle. However, production materials for Star Trek VI assigned the Eagle as NCC-956. Valiant was chosen as the only name not otherwise in use that appeared on a "definitive list" of starship names prepared by the producers of the original Star Trek, and also used (on decals of alternate names) in AMT's 1968 release of the model kit of the U.S.S. Enterprise.

NCC-1718: Two conjectural names for this ship are Endeavour and Excelsior. However, production materials for Star Trek VI presented a number of NCC-1895 for the Endeavour. Thus, for this list the name Excelsior has been chosen, and the ship has been marked as lost under the assumption that the name needed to be again available to be assigned to the lead ship of the Excelsior Class.

NCC-1831: The only conjecture available on Memory Alpha named this ship as Intrepid. Already having two ships by that name, it was felt by Yotsuya's Shipyard that having three ships in the same class sharing that name would be stretching things a bit. Alas, there were no other unaccounted for names to apply to this number, even using the aforementioned "definitive list." Instead, D.C. Fontana's proposed list (one of the two proposed lists that led to the formation of the definitive list) was looked at and from it the name Monitor was somewhat arbitrarily chosen. Fontana's list contained the notation, "Monitor or Merrimac, depending upon your loyalties." Merrimac was established in com chatter heard in Star Trek: The Motion Picture, hence it being included as NCC-1715. It seemed only fair to give Monitor a position on the list, as well, and only fitting that two ships that in history fought on opposite sides in the American Civil War would now serve together as members of the same fleet.

All other conjecture was by looking at cases where Memory Alpha's own conjecture only provided one option, and taking that option as accepted fact within the context of this website.

Two ships on Memory Alpha's list have been omitted. One of them, the U.S.S. Carolina, was omitted as it is unclear if it is even a Constitution Class vessel, and in fact there seems to be just as much (if not more) evidence that it is a Daedalus Class vessel. The other omitted ship, U.S.S. Olympia, is more likely a Constitution Class vessel, and is only omitted as it was only known to be in service in the mid to late 24th century. This would be after the timeline assumed to be known of within the fictional history of this website.