Where as Cruisers such as the Tomobiki Class or Constitution Class were ships designed to operate independently on long term exploratory missions, the Miranda Class was designed as more of a support vessel, and ships within this class are often assigned to specific short term dedicated missions. Examples include acting in groups as support craft within a fleet, or an individual mission conducting non-generalized scientific surveys.

This has proven to be a very reliable and versatile design, and even as newer frigate classes are designed and built, there is also talk within Starfleet of placing new orders for additional Miranda class ships. If this happens, it is quite likely that the Miranda class will continue to be relevant even into the next century. 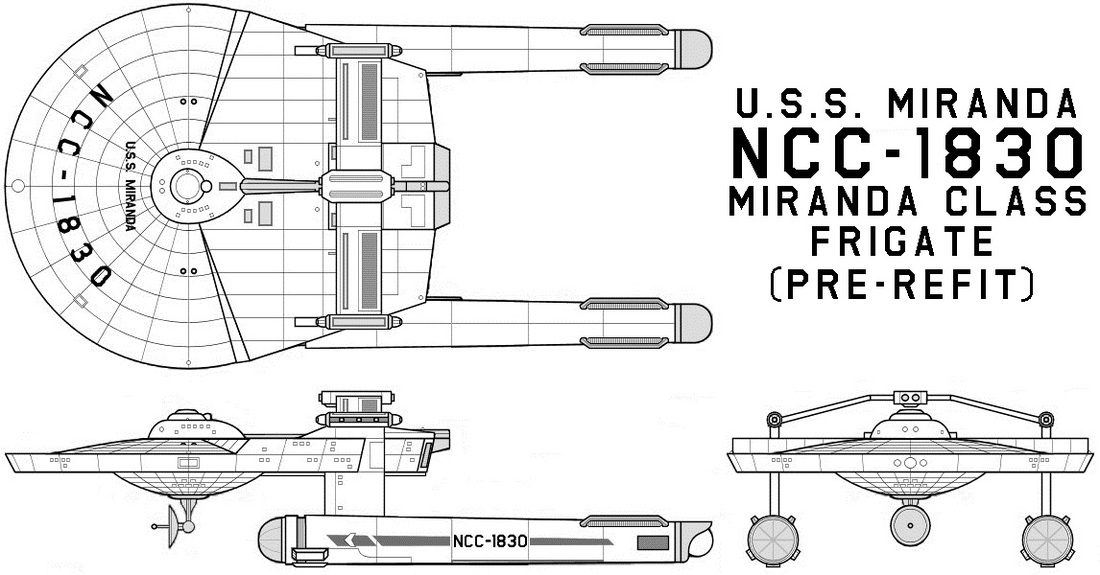 The Miranda Class is not an original design to Yotsuya's Shipyard, and is included to provide context as it is mentioned in the description of multiple other classes included here.

The Miranda Class (specifically, U.S.S. Reliant) was designed Joe Jennings, Mike Minor, and Lee Cole for Star Trek II: The Wrath of Khan. The schematics presented above were taken from Vance's Schematics as found on The Star Trek LCARS Blueprint Database. The "Original Configuration" design presented is a conjectural design found in Vance's Schematics, applying an "Original Series-style" aesthetic to the Miranda Class.

Names and registry numbers: The Miranda Class is a ship that has been shown to be in service for a very extended period, first showing up in Star Trek II and being seen as late as the final season of Deep Space Nine. This website is being written from a point of view of the late 23rd (or perhaps very early 24th) century, so any Miranda Class ships shown on The Next Generation or Deep Space Nine would not be considered for inclusion.

Canonically, this left only two ships: the Reliant, and the Saratoga as shown in Star Trek IV. The Saratoga has a registry number of NCC-1887, and the Miranda, as drawn up by Vance's Schematics, has a registry number of NCC-1830. Going a few past 1887 to round things off, this gave an astounding 60 ships, with 57 of them in need of names! Well, two numbers were able to be subtracted from that list, as NCC-1831 and NCC-1856 were both assigned to Constitution Class ships. Still, 55 was a lot of ships to name!

So it was off to the non-canon Memory Beta. Every name was plugged in that had a registry number attached that fell within the range of numbers on the list. That filled things up a bit! These names were used without checking when Memory Beta says the ship was in service. This included the Lantree, which memorably appeared in a second season episode of The Next Generation. It is assumed that the Lantree, and any other ships that may still be in service in the 24th century, just had long careers. (There is definitely evidence for this with the Lantree, as it is also mentioned on materials produced for Star Trek VI.)

Further holes on the list were filled by randomly assigning names on Memory Beta's list that didn't have registry numbers. In this case, it was first checked to see if the ships in question were ships claimed to be in service in the 23rd century.

After all this, the list was still left with 25 ships in need of names. Still quite a lot, but down considerably from the original 55! So what was done for the rest of them? Simple. Names were just made up.